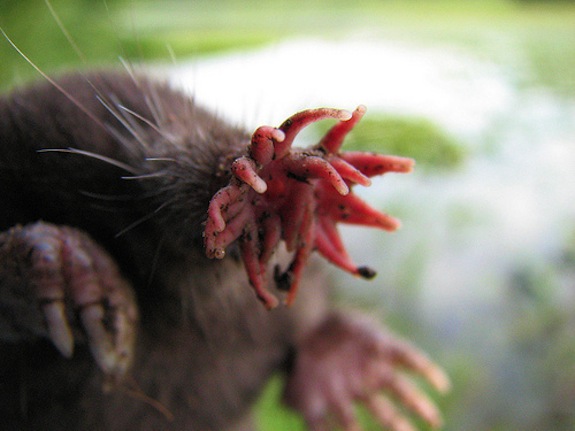 Found in the more ‘moist’ parts of North America, the star-nosed moles are not uncommon, just uncommonly seen.

The distinctive star-shaped organ on the end of their nose is touch-sensitive and made up of over 25,000 minute sensory receptors that they use to feel their way around.

No bigger than an average hamster, these moles also use their noses to blow bubbles under water to sniff out their prey, making them the only known mammal that can smell underwater.

The star-nosed mole (Condylura cristata) is a small mole found in moist, low areas in the northern parts of North America. It is the only member of the tribe having a touch organ with more than 25,000 minute sensory receptors, known as Eimer's organs, with which this hamster-sized mole feels its way around. With the help of its Eimer's organs, it may be perfectly poised to detect seismic wave vibrations.