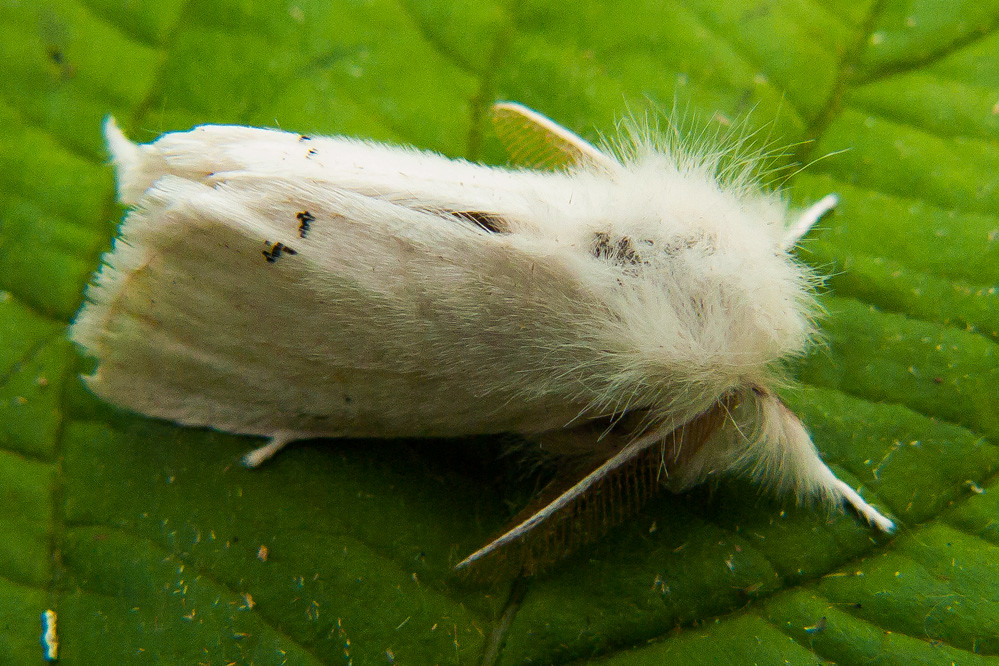 The brown-tail moth (Euproctis chrysorrhoea) is a moth of the family Erebidae. It is native to Europe, neighboring countries in Asia, and the north coast of Africa. Descriptions of outbreaks, i.e., large population increases of several years duration, have been reported as far back as the 1500s. The life cycle of the moth is atypical, in that it spends approximately nine months (August to April) as larvae (caterpillars), leaving about one month each for pupae, imagos and eggs. Larvae (caterpillars) are covered in hairs. Two red spots on the back, toward the tail, distinguish these species from other similarly hairy moth larvae. The winged adults have white wings and a hairy white body with a tuft of brown hair at the tip of the abdomen. Females lay one egg cluster, usually on the underside of a leaf of a host plant. The species is polyphagous, meaning that it feeds on many different species of trees, including pear, apple, maple and oak.
This species was accidentally introduced to the United States in the 1890s. During the early 20th century it was present from eastern Connecticut northward into New Brunswick, Canada, but a subsequent severe population collapse reduced the territory to parts of coastal Maine and Cape Cod, Massachusetts, by the late 20th century. One theory for the decline appeared to be parasitism by a fly introduced to combat spongy moths. Starting in 2015 there has been a population spike and territory expansion in coastal Maine. In Europe, there are multiple parasitic and predator species, yet there is still a history of population outbreaks.