After 100 years, this four-legged Iowa beauty is tree-mendous 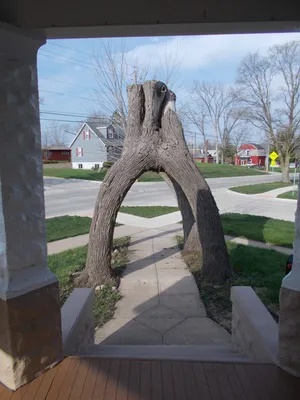 Last month, I wrote about a unique 100-foot cottonwood tree growing in the middle of the road near Brayton, Ia.

Well, this four-legged archway tree in Cedar Falls is giving it a run for its money as the coolest Iowa tree ever.

Four legged tree in Cedar Falls, Iowa.One hundred years ago (1915), John Henning planted 4 linden tree saplings—2 on either side of the walk—leading up to his front door. Mr. Henning, a farmer who had immigrated from Germany as a young man, had moved into town when he retired. With lots of expereince grafting apple trees, he aimed to imitate the archways of lindens he recalled from Berlin. First, the two on the same side of the walk were lashed together and grafted. Then when each pair was tall enough to arch over the walk, he grafted the pairs. Over time, a towering trunk grew from the original four.The four-legged tree of Cedar Falls has weathered two major setbacks in its long life. Not too many years after Mr. Henning started his project, the front right tree died and a replacement was grafted in. Thus the lesser girth of that trunk.

A Facebook post last week by Vintage History — a page dedicated to showcasing "old or unique items" among other things across the country — went viral, garnering almost 3,000 shares and 100 comments. The page had also posted a photo of the tree in August 2016, which went even more viral, if that's considered a thing: 27,500 shares and 500-plus comments.